COMMON NAMES Although called the Jungle Cat in Asia, it is commonly known as the Swamp Cat or Reed Cat in Africa (subspecies Felis chaus nilotica) due to its occurrence in wet habitats.

NAME ORIGIN The name Felis chaus was derived from the Caucasus Mountains where the Jungle Cat was first discovered.

HISTORY The Jungle Cat was tamed by ancient Egyptians to hunt wildfowl and has been featured in Egyptian art. A few mummified remains have been found in tombs.

DISTRIBUTION The Jungle Cat is widespread in Asia with the extreme edge of its range in north east Africa. More about the Jungle Cat range, habitat and subspecies.

IDENTIFICATION The Jungle Cat's plain coat varies from sandy yellow to reddish in its southern range to shades of grey in the north. There are light brown stripes on the legs and a few rings on the tail which has a dark tip. More about Jungle Cat Description.

UNIQUE BEHAVIOUR Jungle Cats feed mainly on small rodents, birds, hares, fish and reptiles. They are often active in the daytime and are unusually good swimmers. In the wild they make use of the disused burrows of other animals but with the loss of habitat they are increasingly being sighted near human settlements. 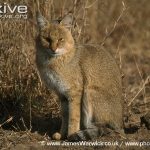 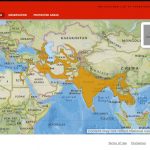